THE MOST HAUNTINGLY ROMANTIC WALK IN PARIS

Père Lachaise cemetery is the most-visited non-secular cemetery in the
world with good reason. Within its walls lie luminaries like Jim Morrison,
Edith Piaf, Oscar Wilde, Chopin, Collette, Gertrude Stein, Modigliani and
so many more of the most celebrated and interesting people the world
has ever known.

Established in 1804, Père Lachaise is the largest cemetery in the city of
Paris (44 hectares or 110 acres). The cemetery takes its name from the
father confessor to Louis XIV, Père François de la Chaise (1624–1709), who
lived in the Jesuit house rebuilt in 1682 on the site of the chapel.
Established by Napoleon in 1804, the cemetery was laid out by
Alexandre-Théodore Brongniart in less than six months.

Père Lachaise Cemetery was opened on 21 May 1804. The first person
buried there was a five-year-old girl named Adélaïde Paillard de
Villeneuve, the daughter of a door bellboy of the Faubourg St. Antoine.
Her grave no longer exists as the plot was only purchased as a temporary
concession.

At the time of its opening, the cemetery was considered to be situated
too far from the city and attracted few funerals. In 1804, the Père
Lachaise had contained only 13 graves. Then the administrators devised a
marketing strategy and with great fanfare, organized the transfer of the
remains of national treasures Jean de La Fontaine and Molière.

The following year there were 44 burials, with 49 in 1806, 62 in 1807 and 833
in 1812. Then, in another great spectacle in 1817, the remains of Pierre
Abélard and Héloïse d'Argenteuil were also transferred to the cemetery
with their monument's canopy made from fragments of the abbey of
Nogent-sur-Seine (by tradition, lovers or lovelorn singles leave letters at
the crypt in tribute to the couple or in hope of finding true love).

This strategy achieved its desired effect: people began clamoring to be
buried among the famous citizens. Records show that, within a few years,
Père Lachaise went from containing a few dozen permanent residents to
more than 33,000 in 1830. Père Lachaise has been expanded five times:
in 1824, 1829, 1832, 1842 and 1850.

The Communards' Wall (Mur des Fédérés) is also located in the cemetery.
This is the site where 147 Communards, the last defenders of the workers'
district of Belleville, were shot on 28 May 1871 – the last day of the
"Bloody Week" (Semaine Sanglante) in which the Paris Commune was
crushed.

Visit Wikipedia
for more information on many of the famous residents of Père Lachaise. 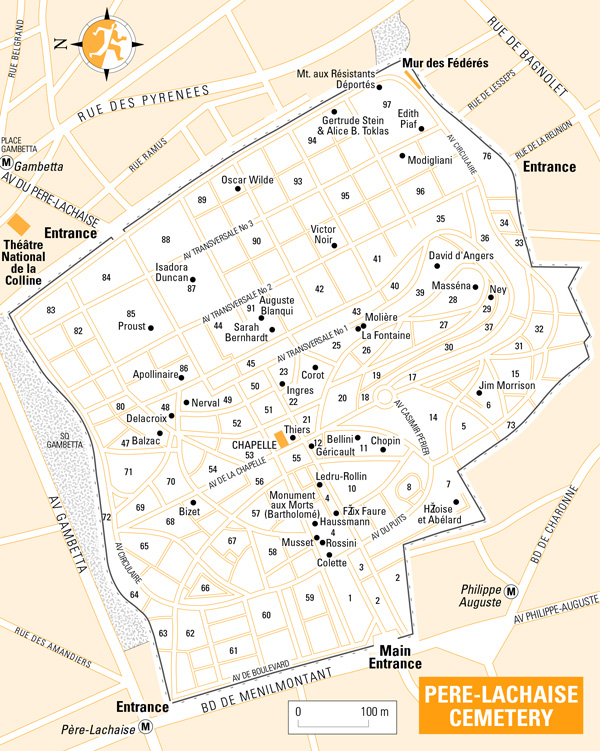 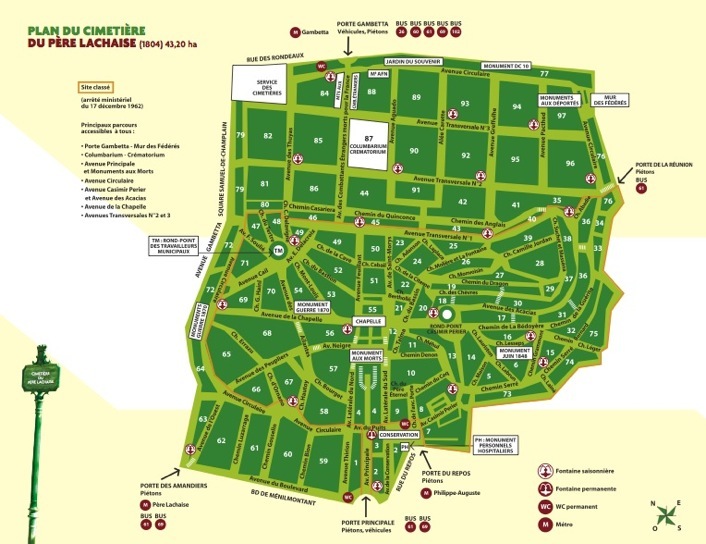